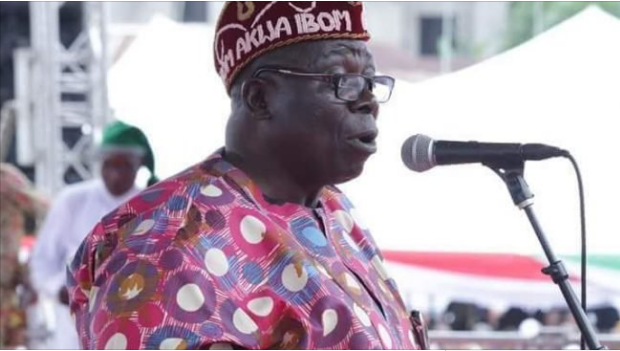 By Raphael Ekpang
Senator Chris Ekpenyong representing Akwa Ibom West senatorial district at the national assembly has urged the minister of Niger Delta, Dr Godswill Akpabio to account for alleged four trillion naira (N4trn) that accrued to Akwa Ibom state during his eight years reign as governor of the state.
Senator Ekpenyong also urged President Muhammadu Buhari to extend planned forensic audit of resources put into the Ministry of Niger Delta to Niger Delta Development Commission (NDDC).
It would be recalled that the federal government recently said it will conduct a forensic audit to resources put into the Ministry of Niger Delta.
Ekpenyong, a former deputy governor of Akwa Ibom state described the call as a welcome development, however said that for the audit to be comprehensive, it must start with Godswill Akpabio.
According to him, “Akpabio who is asking the president to extend the forensic audit to NDDC is his hands clean? He who goes to Equity should go with clean hands. I hope he is clean enough. I have refused to talk but very soon I am going to explode because the same thing is going now in NDDC.
“Putting up a 3-man committee will also be instituted in Akwa Ibom state because he has to account for over N4trillion that he received for eight years and you people danced around him and praised him for eight wasted years.
Senator Ekpeyong said that Governor Attah built roads, airport, provided power and more during his tenure but unfortunately for him, as Governor Attah used to say, “He never had a successor.
He alleged that due to non-performance of Godwill Akpabio as governor compared to the resources at his disposal, Coordinating Minister of Economy, Dr Ngozi Okonjo Iweala said “If Akwa Ibom had put 10% of its resources into working for the state, the people of AkwaIbom would have been better for it”.