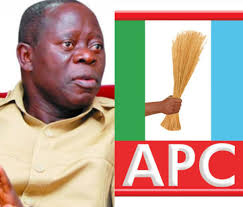 Following the outcome of the presidential election, the National Chairman of All Progressives Congress (APC), Adams Oshiomole has described the Presidential Candidate of Peoples Democratic Party (PDP), Atiku Abubakar as political rolling stone who cannot be the President despite his obvious desperation.

He stated this on Thursday in Abuja during a press conference to react to the issues raised by Atiku Abubakar on just concluded Presidential election and declaration of the winner.

He pointed out that Atiku’s desperation was obvious that it was on record when he challenged the former President Olusegun Obasanjo over his second term ambition.

“I think it also borders on arrogance for for Atiku Abubakar to suggest that that our future is tied to his presidency. Atiku is destined never to be the President of Nigeria and I ask you to review his character.

“Leadership is about character; Atiku’s desperation is so obvious that in 2003 it is on record he challenged his own boss President Olusegun Obasanjo not to do a second term and in the end, they fought naked at Wuse Market. Can you recount how many times he has decamped and recamped; decamped and recamped; decamped and recamped again? Now such a ridiculed rolling stone , does he think the Nigerians are so insane to think that a man who is not stable, who has no conviction and who has confessed that he is going to this race to enrich friends… would he be a possible candidate to elect in time like?”

He faulted the former Vice President on his claims that investors had started leaving the country because President Muhammadu Buhari won the election, saying Atiku was twisting the facts. He also said Atiku’s irrevocable commitment to sell the Nigerian National Petroleum corporation (NNPC) to his friends has brought suspicion that he already collected deposit on the corporation.

He said that Nigeria does not need soft handed investors but genuine investors who have faith in the country and invest in production and labour intense industry.

“If are these kind of business men Atiku is talking about the genuine Nigerians who are victims of financial manipulation and foreign exchange regime, we cannot but open the sky let them fly back ”