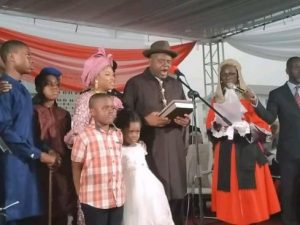 Senator Douye Diri, the candidate of the Peoples Democratic Party, PDP in the 2019 governorship election in Bayelsa State, has been sworn in as the new governor of the niger delta state.

His swearing-in comes as the tenure of Governor Seriake Dickson ends today amid Supreme Court judgement which sacked former governor-elect of the state, David Lyon, and his running mate, Biobarakuma Degi-Eremieoyo, ordering Diri, as the owner of second highest vote to be issued with certificate of return by the Independent National Electoral Commission INEC