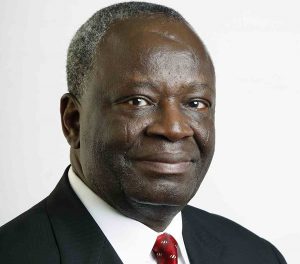 President Muhammadu Buhari has appointed a new chief of staff. He is  Ibrahim Agboola Gambari, a former Minister of External Affairs.

Gambari was born on November 24, 1944 in Ilorin, Kwara State and served as Minister for External Affairs between 1984 and 1985.

He holds the record of being the longest serving Ambassador/Permanent Representative of Nigeria to the United Nations (January 1990 to October 1999), and altogether served under five Heads of State and President.

He was subsequently appointed by the former Secretary-General of United Nations, Ban Ki-Moon, and the chairperson of the African Union Commission as Joint African Union-United Nations Special Representative for Darfur in January 2010.

Gambari was Nigeria’s envoy to the United Nations in 1995 when Ogoni environmentalist, Ken Saro-Wiwa, and eight other activists were hanged by the then-military government of General Sani Abacha, according to Reuters.

He was rejected by the people of the Niger Delta for defending Abacha’s actions against international condemnation at the time of Saro-Wiwa’s execution.

Gambari attended King’s College, Lagos. He subsequently attended the London School of Economics where he obtained his B.Sc. (Economics) degree (1968) with specialisation in International Relations.