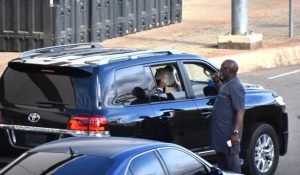 NFF President, Amaju Pinnick trying to plead with minister of youth and sports, Sunday Dare who is already on his way out to forgive their late coming.

All is not well with the embattled president of the Nigeria Football Federation, NFF Amaju Pinnick and the second vice president of the federation Shehu Dikko as the minister of youth and sports, Mr. Sunday Dare snubbed them after they arrive 15 minutes late to a meeting slated for 4pm

The minister had on Monday waited till 4:15 pm for a meeting slated to commence at 4:00 pm. However, the two NFF bigwigs arrived when the minister and his entourage were already driving out.

Amaju Pinnick quickly alighted from his car and approached minister’s car to explain what kept them behind the time scheduled.

The no nonsense minister was reported to have asked Pinnick to check his time as he was ready to attend other engagement with serious persons.

However, eye witness account has it that after the minister has left,  Pinnick immediately turned to his second vice and one other person who was in their company and allegedly said, “what kind of minister is this, we just arrive 10 minutes passed 4pm and he said we are late? Please let’s get out from this place,” he fumed.

Meanwhile, Dare has said that no federation is bigger than the ministry as such he was not ready to condole indiscipline from any federation’s executive.

Instant Africa sports gathered that the minister had invited Pinnick to discuss the welfare and movement of the national U23 team who is preparing to leave Nigeria for Egypt for 2019 U23 African Nations Cup.

The meeting however, would have offered them the opportunity to also discuss on the commencement of the league on November 3rd, 2019.