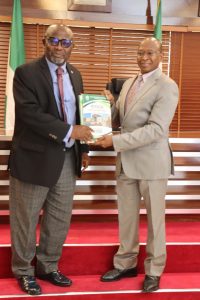 The Accountant General of the Federation, (AGF) Mr Ahmed Idris FCNA has emphasized that in order to enhance the dwindling finances of the government, revenue generating Agencies should be alive to their responsibility and seal loopholes observed in the system.

In a press statement released by the Director (Information, Press and Public Relations) in Office of the Accountant General of the Federation, (OAGF), Henshaw Ogubike mnipr the AGF stated this when the leadership of the Fiscal Responsibility Commission (FRC), led by the Executive Chairman,  Victor Muruako Esq visited him at the Treasury house , Abuja.

He noted that governments at all levels in the country as well as the private sector are experiencing the problem of dwindling revenue, noting that presently it has become imperative to seriously address the issue of dwindling finances.

Idris, opined that  Federal Government annual budget was supposed to be funded through generated revenue, stressed the need to change the narrative and make the Government rely on its inflows and the finances it generates to fund its activities.

While expressing optimism that the era of deficit budgeting in the country will soon be over, the Accountant General of the Federation noted that, “this can only be achieved when revenue generating Agencies brace up and take their responsibility serious, think out of the box and seal the revenue leakages that are observed in the system”.

He made known the readiness of the Federal Treasury to partner with the Fiscal Responsibility Commission and any other Agency to bring up solutions to the current economic problems facing the country.  He approved the setting up of a team comprising officials from both Agencies to bring up a Memorandum of Understanding (MOU) on the areas of cooperation between the Treasury and the Fiscal responsibility Commission (FRC).

He commended the Accountant General of the Federation for his financial management reforms Initiatives as well as the development of facilities at the Treasury House and sought greater cooperation between the Treasury and the Fiscal Responsibility Commission (FRC).