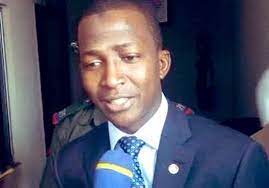 Channels Television reported that Mr Bawa was speaking on the importance of digital identification in commemoration of the National Identity Day when the incident occurred.

He was said to have continued his speech but later stopped and walked off the stage to take his seat.

He fell shortly after sitting down, the TV reported.

The Minister of Communications and Digital Economy, Isa Panatami, and others immediately rushed the EFCC boss out of the hall.

Mr Pantami thereafter returned to the hall and informed the attendees that the EFCC boss was in stable condition, and the event continued.

EFCC spokesperson, Wilson Uwujaren, confirmed “an incident” happening at the Presidential Villa, saying Mr Bawa “felt unwell and had to return to his seat”.

Mr Uwujaren said in a statement that Mr Bawa was hale and hearty after receiving medical condition and he “is due back at his desk”.

“The Chairman of the Economic and Financial Commission, EFCC, Abdulrasheed Bawa is hale and hearty. This clarification became necessary following an incident today September 16, 2021 at the Presidential Villa, Abuja where he was giving a goodwill message to the National Identity Day celebration, felt unwell and had to return to his seat.

“He has since received medical attention and is due back at his desk,” the statement read.