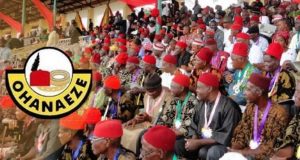 The former Eze Ndi Igbo in FCT, Eze Ibe Nwosu has been expelled by Igbo Delegates Assembly (IDA) and the Association of Eze Ndi Igbo in Nineteen Northern States and FCT in a meeting the two prominent socio-cultural groups  held on Sunday the 12th day of June in FCT.

This is contained in a communique released after the meeting which was made available to newsmen and signed by the trio of President of IDA, Chief Chi Nwogu, Chairman, Eze Ndigbo in the 19 Northern States and the FCT Abuja, His Majesty Eze Pampas Ngozi Wahiwe and Eze Igbo Kano and President-General of Eze Ndigbo in Diaspora, His Majesty Eze Bonifact Ibekwe.

The expulsion of Eze Ibe Nwosu followed an earlier suspension slammed on him by Ndieze of the 19 Northern States and the FCT Abuja in their previous meeting over certain misconducts.

The meeting also deliberated on so many issues affecting the Igbo as an important and major ethnic group in Nigeria especially the agitation for secession of the south east region by the Indigenous People of Biafra, IPOB, the growing insecurity in the region among other pressing issues.

Below is the full text of the communique:

Preamble: After a thorough deliberation on the State of the Nation, our country Nigeria and the secession activities of the Indigenous People of Biafra (IPOB), by a joint meeting of the Igbo Delegates Assembly (IDA) and the Association of Eze Ndigbo in the nineteen northern states of Nigeria and the FCT, the following resolutions were reached: