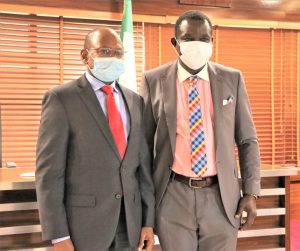 The Accountant General of the Federation, Ahmed Idris FCNA has reaffirmed the commitment of the Federal Government to prompt payment of salaries and the general welfare of workers.

According to a press statement from the Director (Information, Press and Public Relations, Office of the Accountant General of the federation (OAGF) Henshaw Ogubike mnipr, Idris, while interacting with the leadership of the National Association of Senior Civil Servants of Nigeria, who were on a courtesy visit to him in Abuja, noted that the Government is not oblivious of the importance of a well-motivated workforce.

He emphasized that the Federal Government will continue to work assiduously to eliminate hitches that may occur in the system so that prompt payment of workers’ salaries would be sustained.

The Accountant General of the Federation congratulated the Executive of the National Association of Senior Civil Servants of Nigeria on their victory at the elections and prayed that their tenure would be devoid of rancour and unnecessary conflicts.

He advised the leadership of the Association to focus on issues that promote unity and well-being of its members and the country at large. He said the Association should, “… remain on track; never deviate, never be dragged into trivial, sectional and sentimental issues which are not basic to the cause and objectives of the Association”.

He assured the leadership of the Association of the readiness of the Federal Treasury to continue to partner and collaborate with them on all matters that have to do with staff welfare and national development.

Speaking earlier, the National President of the Association of Senior Civil Servants of Nigeria, Comrade Tommy Etim PhD, opined that to ensure productivity, there must be industrial harmony in the public service. He expressed delight at what he described as symbiotic relationship between the management and the staff unions in the Federal Treasury.

He applauded the management of the Federal Treasury for the priority given to staff welfare and safety as well as infrastructural developments and expressed the readiness of the National Association of Senior Civil Servants of Nigeria to work with the Accountant General of the Federation.