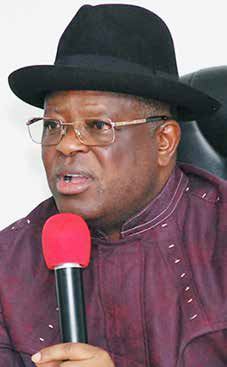 Although Ebonyi State is not financially buoyant like some other states in the federation, Governor Dave Umahi has resolved to create a fertile environment for commerce and industry to thrive in the State. His determination is to kick-start the state’s economic development. Our correspondent recounts the master-plan on road management and other developmental projects embarked upon by the administration, considering the importance of infrastructure in every economy.

Governor of Ebonyi State, Engr. Dave Umahi is desirous to develop the state and one of the measures is to give the State a face life. If you go round the state, you will discover that most of the roads within the State Capital and beyond are in very deplorable condition.
But within 100 days in office a lot have been done through Ministry of Works & Transport to change the narratives. Ogoja road; Nkaliki road; Gunning road; New Market road, and many others are now wearing a new look with concrete pavements and asphalt surface. Investigations conducted by our correspondence revealed that the government intends to conclude works on the following roads between now and December: Udemezue Street; Udensi Street; Ukpogwu Road; Ogoja Road; Obiri Street; among others.
The government, according to the source is equally developing rural communities by ways of providing amenities hitherto enjoyed by only cities. But the major work is in road construction and rehabilitation.
The construction involves flexible and rigid pavements; the flexible pavement is the asphaltic laying The administration’s priority in this massive construction of roads and bridges across different communities in the state is born out of his campaign promises which centered more to improve the lot of the people of the State in infrastructural provisions.
What is striking about these projects is the state Governor David Umahi’s large heartedness towards attending to all roads, both urban and rural, irrespective of whether they are State or Federal government-owned.
One of such gestures was extended to the people of Isinkwo community in Onicha local government area of the state who were thrilled and stunned by the development as they sang and danced joyfully before Governor Umahi and his entourage including former Governor Sam Egwu, some National Assembly members and elders of the state who were at the site of the project during his visit.
The road which criss-crosses Abomege, Ishinkwo, Ukawu, Ugwulangwu and Okposi communities of both Onicha and Ohaozara local government areas of the State had been abandoned by successive governments of both federal and state before the coming on board of the present administration which took the bull by the horn to ensure its construction.
Inspecting the projects in the company of other stakeholders at Onicha local government area of the state, Governor Umahi who expressed satisfaction over speedy and quality work done so far by the contractors handling the projects added that his administration
was able to achieve its current developmental feat through the prudent management of the state’s resources.
He assured the people of the state of the continued assistance of his
administration towards improving the living standard of the people of the state. Also, a political leader of the State and former Governor of Ebonyi State, Dr. Sam Egwu noted that the project when completed would give a new lease of life to the communities benefiting from the construction work as they will be able to integrate fully with their counterparts across the state.
The road had been abandoned for over 40 years as the last Pail Loader that worked on the road came to the site in the 1970s. According to him, the length of the road under construction is 25.4 kilometers with concrete pavement as the contract sum for the construction of the road and bridge were N3.4 billion and N728 million respectively and would be completed in no distant time.
It was gathered that the state government has paid all the contractors handling the projects a little above 500 million even as he described the project as one of the fastest construction works in the country. The completion date for the bridge is 12 months while that of the road is 18 months; the contract sum of the bridge is N728 million while that of the road is N3.4 billion; the bridge is 6 spans with concrete pavements.