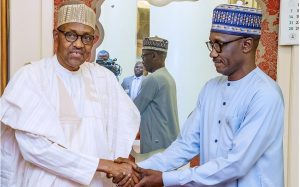 Media Practitioners in the Energy Sector, MPES the umbrella body of major players in information gathering and dissemination domain of the oil and gas industry has hailed president Mohammadu Buhari and  Mallam Mele Kyari, the Group Managing Director, GMD of Nigerian National Petroleum Corporation, NNPC for their respective leadership roles in the new appointments made for Adokiye Tombomieye, Mohammed  Ahmed, Adeyemi Adetunji, Billy Okoye and few others following the recent reorganisation of the corporation describing it as impeccable decision that holds great prospect for the state owned oil giant.

This is contained in a press statement the body made available to newsmen in Abuja after its monthly meeting last Friday, signed by the National Coordinator and Secretary Johnson Eze and Mathew Dadiya respectively. The group highlighted that capacity, experience and geographical spread were fully accorded balanced consideration in the various positions and each of them were ultimately found most befitting, pointing that this is an expression of the confidence the Federal government and management of NNPC have on these great individuals.

“Though the fact that President Mohammadu Buhari’s commitment in giving Nigeria his best has never been in doubt but this particular appointment is another obvious example that further demonstrates that deep commitment. Anybody close to NNPC will appreciate the wealth of experience, intellectualism and drive this team will inject into the hydrocarbon business of NNPC. It is indeed breath-taking that persons like Tombomieye, Ahmed, Adetunji, Okoye were recognised and given this new positions of responsibility adding that there is consensus of optimism that they will take the corporation to greater height”. The statement read.

“It is also well known that the appointment may not have come without the dutiful recommendation of Mallam Kyari who has proven to be of uncommon habit of leading NNPC management to the right direction since becoming the GMD. This is another signs of his adroit competence in the leadership responsibility especially in line with the corporate vision of Transparency, Accountability & Performance Excellence (TAPE) of the corporation. There is no doubt that if this trend is maintained as is generally expected that the corporation will evolve on global stage as one of the topmost state-owned oil and gas industry in the nearest future” the statement added

The statement while emphasizing its gratitude for the president and the GMD for the right decision also commended the appointees for the dedicated service they have given to the corporation that earned them the new roles. It confirmed that this team of appointees are thoroughly bred industry players who have all it takes to lead their various positions of authority. “There is no doubt that they will add unprecedented value to their respective offices and to the collective growth of NNPC”, the statement concluded.