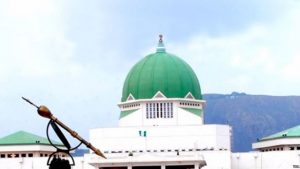 A renowned advocacy body on national issues, Coalition of Civil Societies and Media Executives for Good Governance in Nigeria (COCMEGG) has passed vote of confidence on the activities of National Assembly NASS, its management and service commission while at the same time condemned what it termed media arracks and sponsored campaigns of calumny targeted at the law making arm of government.

In a press statement made available to newsmen in Abuja Wednesday by COCMEGG and signed by its president Comrade Omoba Kenneth Aogbegbele the body particularly commended NASS for approving an upward adjustment in the years and age of retirement for the staff of the legislative arm describing it as necessitated by the overriding need to entrench specialization, professionalism and quality service delivery that come with years of experience which is in sync with international best practices as borne out by overwhelming evidence from other jurisdictions.

COCMEGG further drew attention to the orchestrated, sponsored, false, misleading statement, and media mischief against the Management of the National Assembly in various publications especially with the recent news headline: “CSO Wants Implementation of NASS Amended Condition of Service Stopped,” in which as champions and propagators of transparency, good governance and accountability in public service and the total wellbeing of Nigerians it condemns in totality. According to COCMOGG it is malicious uncouth statement, frivolous content of bizarre allegations, and politically motivated smear campaign of calumny by the agents-provocateurs that go by the name “New Level Due Process Group.”

“The National Assembly’s Revised Condition of Service is clearly within the framework of legislative independence and the limitations imposed on it by the Nigerian Constitution. The existence of the Judicial Service Commission and the National Assembly Service Commission, which are creations of the constitution, invests in them certain powers to act as captured in the relevant sections of its Acts. As an independent arm of government, the Legislature, just like the Judiciary, has the legal powers to fashion rules and regulations regarding the conditions of service of its workforce. And, as such, the “Next Level Due Process Group” has displayed crass ignorance as “Conditions of Service” cannot be same as Bill.” The statement clarified.

Concluding the group stated” COCMEGG believes that Mohammed Abba Sani-Omolori of the National Assembly and Engr. Ahmed Kadi-Amshi led National Assembly Service Commission (NASC), the duo, a worthy partnership, of shared vision and total commitment and collaboration will lead to a pivotal enduring legacy to bequeath the next generation, surmounting the challenges therein, and guiding the Legislature in the path of consolidation and sustainability. It further urged the leadership not to be distracted by these allegations but remain focused on the task ahead.

Below is the text of the press statement: