Hon. Abdullahi Felicitates With The Speaker at 59 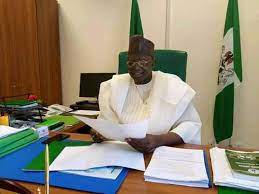 The Legislator representing Gwale Federal Constituency of Kano state in the House of Representatives, Hon. Abdullahi Lawal Ken Ken has conveyed warm birthday greetings to the Speaker of House of the House, Rt Hon Femi Gbajabiamila, who turned 59 last Friday describing him as a motivational leader who believes in that purposeful style of carrying all the members of the House along.

Speaking to journalists in his office, Hon Ken ken pointed out that the unity of purpose with which the speaker carries all members along has reposed much confidence on his leadership style in this 9th Assembly, adding that with such technique they have been able to achieve good results and the deserved service delivery to our various constituencies and the  Nation.

He described the 9th assembly as the best among the previous ones because of the unity they are able to achieve which enables them to work together irrespective of tribe, religion and political affiliation.

The lawmaker reiterated that, the unification achieved by the speaker has brought them together as one family which has further enabled them to work with the executives more harmoniously.

He added that the leadership qualities displayed by the  Speaker has also brought  accountability and efficiency in the management of the affairs of the House of Representatives which is the reason  they are able to achieve results.

Hon Ken also emphasised that the speaker has personally demonstrated unquantifiable love for him, which has correspondingly generated his interest, love and affection motivating him to him to remain in the main stream of affairs to work in a closer and cordial relationship with him irrespective of tribe or religion.

He added that the speaker always  put  the interest of the members first  before any other thing which  signifies his that he cares so much and  holds them in high esteem.

While wishing him long life and prosperity, he prayed that God should avail the Speaker greater opportunities to exhibit at higher level such sterling leadership qualities as he has been doing in this session of National Assembly.