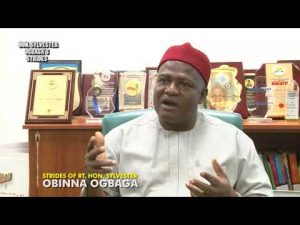 Following the commencement of intense campaign for the 2019 election, a political pressure group, Movement for Democratic Stability (MDS) has canvassed for re-election of Hon. Sylvester Obinna Ogbaga, representing Abakaliki/Izzi Federal Constituency, of Ebonyi State, in the House of Representatives calling on every indigene of the constituency to come together and vote massively for him again as he has recorded impressive representation.

In a press release made available to newsmen in Abakaliki, the Ebonyi state capital yesterday by the chairperson of the group, Barr Peter Ogbuaebor, the organization’s decision to drum up support for Hon Ogbaga’s re-election bid followed his outstanding performance in the 8th assembly, adding he has confounded doubters by his brilliant attainments. In other words, ‘he has exceeded people’s expectation’, the statement said.

‘’Our group went round his constituency and what impression we gathered from the people indicates they are pretty happy with him. They say he is connected to them in a way quite rare in the contemporary political representation. Rather than seems detached, aloof, from them as is the habit of some, he is always with them executing one constituency project or another if it is not provision of portable water like bore holes, it is on rural electrification or even on empowerment of youth of his constituency.’’

Some youths, Ogbuebor  said, have benefited from his youth empowerment programme which includes scholarship to his constituency’s indigent set, distribution of motor bikes etc., He added: it is the same youth that are now campaigning for him, believing him to replicate the same achievements. Hon Ogbaga, who is contesting for the 3nd time in row, has been an active member making meaningful contributions in issues and debates in floor of House of Representatives, the group states is a generously liberal and seldom self-centred politician worth their continuous support.

‘We will ensure that he wins the next assembly election’’, Barr Ogbuebor pledges. ‘’As I speak to you now, my group is going from one section of his constituency to another. The intention is to canvass for him, making sure like 2015 he wins to continue bringing good tidings to his people.

Our independent finding shows that Hon Ogbaga might encounter no formidable opposition from any quarters and might coast home victory in 2019’s assembly election, given his unique pedigree. We are exclusively informed that his constituency has already resolved to re-elect him.

Recalling that Hon Ogbaga is the Chairman House Committee on Commerce, Nigerian government was able to recover easily from recession due to far reaching reforms in the commerce and international trade  courtesy of the roles of his committee in terms of advising the executives and undertaking necessary oversight functions, visiting commerce related agencies to ensure that they are functioning properly.

Nigerians, Barr Oguebor said, have some special respect for him for his effort at delivering the dividends of democracy to his constituency in addition to being a most reliable and dynamic chairman of Commerce committee of the House of Representatives has ever had in her 58 years of nationhood.