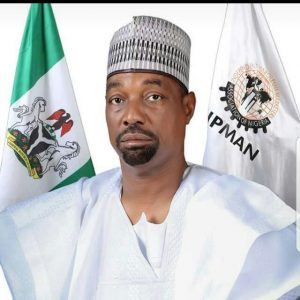 The Independent Petroleum Marketers Association of Nigeria, IPMAN has hailed the appointment of DIG Usman Alkali Baba as new Inspector General of Police describing him as most experience and ranking police for the position of inspector general of police
In a press statement released by the National President of IPMAN, Engr Sanusi Abdul-Fari in katsina Tuesday, the Association thanked President Mohammadu Buhari for taking his time to make impeccable choice as going by the pedigree of the new IGP as the immediate DIG in charge of Force Criminal Investigation Department, FCID, of Nigeria Police Head Quaters, he is thorough and discrete investigative officer he will enhance Mr President policy on community policing,
“Another remarkable beauty of this appointment is that it’s based on professionalism, competence, and years of service to the nation. Which mean in all key factors considered in choosing DIG Alkali for this position, he emerged topmost. So it is not a time when some senior officers or professional colleagues will complain of being side-lined in the process which and which often has been pointed out as dampening morale of some personnel” the statement read.
“Under this new police command, we are lucky to have an IGP who holds a teacher’s grade II certificate (TC II) from Teachers College, Potiskum, Bachelor’s degree B.Sc in political Science, Bayero University Kano and Master’s degree in public Administration, from University of Maiduguri. Borno state. By this we have police commander who can teach his men how to work, who understands the political terrain and who can administer the police professionally” the statement added.
IPMAN president further lauded the policing skills and gallantry of Alkali that have seen him speedily grow in ranks culminating to the IGP position he occupies today and called on all Nigerians to avail him the necessary support to enable him succeed as a tree cannot make a forest.
While reassuring of the confidence Nigerians have on the new IGP’s capacity to improve on the internal security of the nation going by his track-record, he prayed that Allah in his infinite mercy should grant him the wisdom to pilot the office most successfully submitting that the new IGP should count on IPMAN’s readiness to support his office at all times especially as it relates to petroleum sector:where they operate  as economic crimes of oil bunkering and oil pipelines vandalism always require police actions to curtail.
Facebook
Twitter
Pinterest
LinkedIn