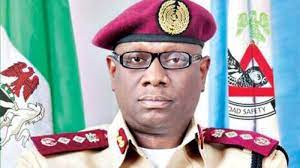 The Eid el Fitri has come and gone leaving some interesting and remarkable relics. To the Muslim community, it is a wonderful opportunity to celebrate the end of Ramadan fast and in fact begin to harvest Allah’s blessings that go with obedience to his commandment. Many traveled to various destinations to mark the occasion with their loved ones and returned safely to their station. For the Federal Roads Safety Commission, FRSC ably led by Corps Marshal Boboye Oyeyemi it was a time to up their games. And in fact, they lived up to expectation as special patrol team were diligently stationed at all critical sections of Nigerian road network to ensure hitch free road travel.

The result is that irrespective of the fact that social activities were at their peak FRSC was able to minimize road accident, reducing it to a record statistical value of 27%.  By implication what this means is that if the accidents that are encountered in the country within such period is to be 100 in number, the effort of the FRSC successfully reduced it proportionately to 73. Bearing in mind that these road mishaps under reference are mostly caused by human behavior, which is very difficult to determine or regulate, the figure can therefore be said to be significant and commendable.

According press statement from FRSC Public Education Officer, Bisi Kazeem “Arising from the rejigged operational tactics deployed during the just concluded 2021 Eid-El-Fitri special patrol systematically organized to ensure free flow of traffic and safety of all travelers, the Federal Road Safety Corps (FRSC) has stated that it recorded 27% decrease in the total number of crashes that occurred during the period under consideration, as a total of 5511 offenders were arrested for committing 6858 offenses between 11 to 17 May, 2021 that the operation lasted.”

According to Mr Kazeem, the decrease recorded in RTC is largely attributed to several coordinated factors, among which are; the establishment of Station Offices in almost all the 774 Local Government Areas in Nigeria; intensified public enlightenment and sensitization campaigns held nationwide in collaboration with key stakeholders in the transportation sector and beyond; and effective patrol operations.

Quoting the Corps Marshal, Dr. Boboye Oyeyemi, Mr Kazeem stated that the Corps now has a wider coverage due to the establishment of more FRSC Commands, Outposts, road side clinics and Zebra points who now feed in reports from different routes that were hitherto not thoroughly covered. He further said that Dr Oyeyemi also revealed that the comparison made with year 2019 period is due to the effect of the COVID-19 pandemic in 2020 which halted conventional operations.

The corps Marshal was also said to have stated that the reduction both in crashes and number of offenders apprehended is an indication that the public enlightenment efforts of the Corps is yielding results and road users are complying accordingly. “He stressed that the tempo in the operational and advocacy front will be sustained to ensure continuous decrease in number of road crashes, number of persons involved, as well as decrease in the number of persons killed by crashes on our roads” Kazeem clarified.

“According to him, the Corps is advancing steadily towards the actualization of its corporate mandate of creating a safer motoring environment and eradicating RTC on our roads. This tempo will surely be sustained as all efforts have been adequately put in place to make the roads safer for all” he added.

Further he recapped  the appeal of FRSC to the public assist the Corps by reporting any form of obstruction or emergency on the road to the spokesperson through the FRSC Toll Free numbers 122 or tune into the National Traffic Radio 107.1FM to report same or any other contravention seen on the road.

This is not the first time FRSC will be organizing a special tactical operation to ensure free flow of traffic and safety of travelers on Nigeria road network. In fact, it has been an established tradition especially under Oyeyemis’s leadership of the corps that in every festive period, the personnel of the FRSC usually sacrifice their comfort and massively redeploy strategic operations across the length and breadth of the country to ensure that they add value to their mandate to Nigerians. The result has been successive improvement of road safety indicators.

Anybody privy to the workings of the office of the corps marshal will no doubt agree with me that starting from 1st September of every year to ending of January of the succeeding year, FRSC Boss usually minimizes every social activity and devotes his entire time and energy to mobilizing effectively for improved conduct in the safety and secured vehicles usage on Nigerian roads. There are several instances the corps marshal has turned down coveted awards ceremonies and important meetings because that fall within the ember period when his schedules are quite tight.

As a government, it is high time Nigeria takes peer review of those agencies that are performing creditably well; understudy them carefully and identify those helpful principles that the management have put in place and explores ways to apply them to resuscitate agencies that are dying. FRSC under the Oyeyemi has been a proactive, proficient and inspiring example. It is therefore expedient to take some lessons from its success story and apply them for national development.