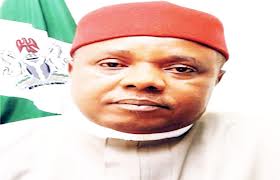 Engr Elias Mbam was on Thursday sworn in for the second term of office as chairman Revenue Mobilization, Allocation and Fiscal Commission RMAFC by President Mohammadu Buhari

Mbam from Ebonyi State was appointed as the chairman of the Commission alongside 29 others as Commissioners representing various states. Chiyere Aniobi from Enugu state is the only female in the team

President Buhari, during the event which took place at the Presidential Villa, urged the officials to be fair and just to the three tiers and arms of government at all times.

He has also urged the commission not to compromise its constitutional mandate for whatever reasons.

“The mandate of the Commission is very wide and important for our country’s economy. The Commission must be fair and just to the three tiers and arms of government without compromising its core mandate,” he said.

Mr Buhari said the officials were chosen based on their integrity and proven track records thus, much is expected from them.

He appealed to the commission to work hard towards meeting government’s target of lifting 100 million Nigerians out of poverty.

“In my speech on June 12 Democracy Day, I informed Nigerians that this administration has laid the foundation for transforming our country and liberating our people from the shackles of poverty by putting policies and measures to integrate our rural economies to the national economic grid. Our measure is to extend credit facilities currently available, to be able to encourage and support domestic production of basic goods and reduce our reliance on imported goods.

“I set a target for our country to lift 100 million Nigerians out of poverty in 10 years. This commitment is to further challenge the Revenue Mobilization, Allocation and Fiscal Commission to rise to its constitutional responsibilities and mandate.

“I will charge the chairman and honourable commissioners to concentrate more on expanding the sources of revenue to the federation account and other non-oil sources including solid minerals, use all legal ways and means to strengthen its monitoring mechanism and block leakages of revenue from the federation account, all relevant laws and regulations on revenue collection and remittances should be fully complied with and appropriate sanctions visited on defaulters,” he said.

The President assured the commission that government will continue to provide all the necessary support that will facilitate its work.

He urge the National Assembly to put in place relevant enabling laws that will guarantee the commission the legal ability to ensure that defaulters of revenue laws are appropriately sanctioned.

Although Mr Buhari had in July 2016 announced the reappointment of Mr Mbam as the chairman of the commission, his name was not sent to the National Assembly until recently when it became necessary to fill the post.

Following his renomination, the Senate screened and confirmed his reappointment in May which culminated to the swearing in.

Some of the tasks facing the commission as it gets to work include giving the nation a new revenue formula which constitutionally is supposed to be reviewed every five years.

RMAFC was established by Decree No.49 of 1989 (now an Act of National Assembly) to handle revenue allocation and fiscal matters on a continuous basis.

The body is also responsible for fixing the remuneration of political office holders as well as monitoring the revenues accruing to the federation account from revenue-generating agencies.

The confirmation was sequel to the adoption of the report of the Senate Committee on National Planning and Economic Affairs.