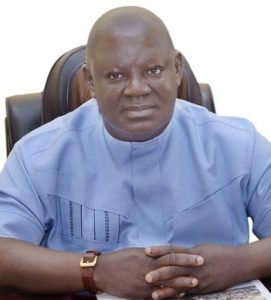 There was wild jubilation at the offices of the National Space Research and Development Agency (NASRDA), Abuja over the weekend. This was due to the taking over of Dr Francis Dubem Chizea as the Acting Director-General of the Agency. Dr Dubem was the most Senior Officer and was directed to take over from the out-going Director-General/CEO, Mr. Jonathan Angulu, via a letter from the Permanent Secretary of the Federal Ministry of Science and Technology, Dr. M. B. Umar, dated 15th May, 2020.

In the referenced letter, the Permanent Secretary directed Mr. Jonathan Angulu thus: “In line with the Head of the Civil Service of the Federation’s circular No. OCSF/330/113 dated 18th July, 2019, you are required to hand over to Dr. Francis Dubem Chizea, who is the most Senior Officer in NASRDA to serve as an overseeing director of the Agency pending the appointment of a substantive Director-General by the Federal Government.”

Dr. Dubem is a seasoned bureaucrat and a scholar of repute, who has distinguished himself representing the agency at both home and abroad. He rose from the ranks to the acting capacity with several years of experience following years of service to the Agency at different top management positions.

Our Correspondent further gathered that many of the staff were in happy mood and there was wild jubilation at the headquarters of the Agency as few staff who spoke to Our Correspondent affirmed to the open door policy of Dr. Dubem who, many say, will bring his managerial dexterity, experience, to bear on the management of NARSDA.

It will be recalled that NASRDA was created in 1999 to coordinate and oversee all space activities for Nigeria. The agency embarked on an aggressive human capacity building and accumulation mission. From its creation, the agency has been strongly committed to achieving independent satellite development capability. As the agency celebrated its 20 years of existence in 2019, it has emerged as one of the largest space institutions in the African continent – launching five successful satellites of various sizes, all of which involved technology transfers to Nigerian scientists and engineers.