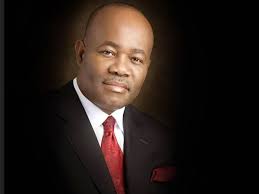 The resolute effort of the Honourable Minister of Niger Delta Affairs, Obong Godswill Akpabio, duly approved by President Mohammadu Buhari to rejuvenate the Niger Delta Development Commission, NDDC into a mandate-driven agency, suffered a hitch last week in National Assembly NASS as both chambers of the law making body had for the umpteenth time ordered probe of the Commission. In the manner it came, many believe it is disruptive of the operations of the commission and the overseeing Ministry especially as it relates to the forensic auditing going on there.

Anybody familiar with legislative business of NASS will agree that for a single motion to be moved simultaneously in both chambers and given concerted endorsement as in this case, it is either a communication that emanates from the president or an issue of urgent national importance. But it stands, it is neither of the two rather a coordinated action of two illicit groups namely: The corrupt and selfish individuals who don’t want the forensic audit and restructuring of NDDC to succeed because they are benefitting from status quo and those who want Obong Akpabio to be removed from office as minister for political reason and as vendetta for loss of appointment they suffered in having effective Interim Management Committee, IMC in place in NDDC – recent publication and actions of some persons attest to this.

While the Senate set up a 7-man ad hoc committee headed by Senator Olubunmi Adetunbi to investigate the financial transactions of the IMC in the last three months and also directed its Committee on Niger Delta Affairs, headed by Senator Peter Nwaoboshi, to investigate the appropriateness of the alleged arbitrary sack of the management staff of NDDC within one month, the house of Representatives mandated its committee on NDDC to investigate all issues relating to misapplication and misappropriation of funds by the commission, in addition summoned the minister to appear and respond to the allegations.  All these follow allegation of N40 billion frauds and arbitrary sack of the management staff of NDDC against the Interim Management Committee (IMC) of NDDC.

Why NASS has chosen to be pulling back the hand of the clock as it relates to this noble assignment of the minister in NDDC remains a puzzle. Though it may appear a normal legislative action to prevent issues from going bad but the colouration, timing and general nature appear to send wrong signal especially to our dear people of the Niger Delta and indeed Nigerians as a whole that NASS is not feeling the pulse of the nation.

For instance, it is a general consensus that NDDC has not lived up its mandate of driving the expected development in the Niger Delta region going by the high volume rots that are prevalent in it which need to be cleaned up. Consequently when president Buhari in October 2019 in his wisdom ordered forensic audit of the commission, it was applauded by all well-meaning individual. It is therefore shocking that NASS is now coming up with a discordant action of ‘probing a probe’ more so when the forensic audit is still in progress.

Furthermore, NDDC and Ministry have come out to deny spending N40 billion. One cannot but imagine the depth of malice and mischief one has endured when notable persons rely on wrong and deceitful information to make official speech especially in parliament as in this instance. A look at what transpired in NASS with regards to this motion for probe of NDDC reveals that Sen George Sekibo who moved the motion in the Senate allegedly acted on behalf of the former Acting Managing Director of NDDC in the name of Dr. Gbene Joy Nunieh who hails from river state. Similarly, Hon Peter Akpatason who moved the motion in the House did so in solidarity with Dr. Pius Odubu who was nominated and screened by the senate as Chairman NDDC but was never sworn in as both of them are from Edo state. Is this how we are supposed to be thinking? Must nepotism drive every interest?

Prior to the outplay, this syndicate who are up in arms to see that Obong Akpabio reforms in NDDC do not see the light of the day had earlier been sponsoring different groups to issue press statements calling on the Minister to be sacked using this same allegations and even worse fabrications. Online news portals and conventional newspapers are awash with all these trumped up accusation. It is therefore not surprise when it started appearing in NASS. But he who alleges must prove.

Let us not forget that the capacity and competence of Obong Akpabio to deliver entrusted responsibility have never been in doubt among those who know him. View his past as a former senator in the last session of National Assembly, a former executive governor of Akwa Ibom state or former commissioner for Petroleum, Local government and chieftaincy affairs of Akwa ibom state to mention but a few, his record remains a trajectory of diligent, dexterous and  productive administrator who always leave office without blemish.

As a senator that represented Akwa Ibom East in the last session of National Assembly, Obong Akpabio stood out as a rallying point and as one whose activities gave the opposition Peoples’ Democratic Party PDP visibility. On that account they had no option than give crown to whom is due and appoint him the party leader i.e. the minority leader even against the usual rule that the reserved such position for ranking senators.

His tenure as the Governor of Akwa Ibom state was another luminous example as it marked a golden moment and a nostalgic reference point in the development history of the state when the fortunes of that Niger delta state took a quantum leap to actually live out that identity as land of promise. His policies and programs reinvented and spiked the revenue generation, Infrastructural provision, human capital development and ultimately placed the state as the fastest growing in the country. Under his administration, network of rural and urban roads, bridges and flyovers were massively constructed; airport and standard hotel were also established. Education health and electricity also received the deserved attention leading to what was then known as uncommon transformation.

Therefore, given the scenario when president Muhammad Buhari was re-elected into office in 2019 he was in search of a development activist who can translate the good governance dream of his administration into Niger delta development. Like a golden fish that has no hiding place, the choice of Akpabio quickly came to mind. In fact, Obong Akpabio and the Niger Delta region is analogous to experienced ship navigator on a familiar terrain, who fully understands those key features that constitute veritable compass to successfully arrive the desired destination. He has started well-first, is getting the NDDC right on its mandates. But whether the detractors will allow him or not is another issue.

It is indeed worrisome that a reputable institution like NASS is giving flying allegations that lack substance undue attention to the extent of distracting NDDC with probes more so under diligent ministerial supervision of Obong Akpabio who is even a former senator and in fact a Principal officer.

Maybe, it is possible NASS is holding strongly to the principle that in democracy majority have their way and minority have their say. Thus, listening and perhaps conducting a probe into the INC of NDDC to the law making institution is a much more dispassionate way of proving to the world that the allegations are false and laying them to rest. Otherwise, like he rightly started with forensic audit of the Commission, the minister and IMC under his purview are epitome of transparency and accountability, as such require no probe.