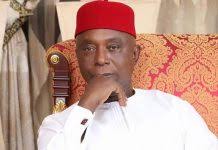 The summary of the online publication is that Hon, Ned Nwoko is accused to be a land grabbing businessman with phony deals in Malaria project and Paris club loans. The narrative is so old, repetitive and boring! The monotony of the propaganda against the lawyer turned philanthropist, must have become mind numbing if not tiresome to his frustrated  detractors.

The genuine and germane story clear in the open remained that Nwoko who represented Aniocha /Oshimili Federal constituency in the House of Representatives between 1999 and 2003, stands today as the initiator of the Malaria Eradication Campaign in Africa. He continues to tirelessly deploy his personal resources, energy and time to serve humanity with salutary patriotism.

It would be recalled that he undertook a historic expedition to the frozen climes of Antarctica in January 2020, to draw international attention to Malaria scourge in the continent, the first black African to make such trip, making Nigeria the 13th country in the world to have its flag hoisted in the icy South Pole. He returned to his fatherland to initiate a comprehensive action plan against Malaria, involving high level stakeholders’ meetings across Africa, endowment of research grants, sensitization Programmes and social mobilization of the people among other activities ALL personally funded under NED NWOKO FOUNDATION.

For the avoidance of doubt,the initiative seeks to achieve the following:

The infantile angle to the Sahara Reporters story is the faulting of Prince Ned’s anti-malaria vaccine development quest on the premise that he is not a scientist. The truth is that Prince Ned does not need to be a scientist or a pharmacist to fund a malaria research. Again, this exposes the shallow and mediocre mentality of the writer. It is noteworthy that Bill Gates and others who had funded vaccines did not need to be pharmacists to do so. Prince Ned like other philanthropists is only interested in making his country and Africa a better place and will continue to work with relevant professionals to achieve that.

This sacrifice has earned Ned Nwoko widespread commendations from African leaders, the federal government of Nigeria, sub national governments, credible institutions and international organizations especially WHO and UNESCO as well as prominent individuals and ordinary citizens.

It mocks truth as claimed by Sahara Reporters that “ Nwoko has been accused of defrauding some African monarchs and leaders through fictitious giant projects he lured them to invest in”. He has never sought for or received funds from any company, African leader or individual on the Anti Malaria project. Any one that derides his selfless efforts in dealing with Malaria, a scourge that has killed millions of people in Africa, even more than Covid- 19 pandemic, is just callous and dishonest. The meetings with African leaders have been to intimate them on the Malaria Project and the need for them to align with the fight. Some of these African leaders are funding different malaria interventions for eg Again, the pilot trial of the WHO approved malaria vaccine (with low Efficacy) known as RTS,S was conducted and concluded in Ghana, Malawi and Kenya. As a visioner, Prince Ned Nwoko saw the need to meet with these African Leaders to harmonise actions and scale up the intervention strategies so that malaria will be a thing of the past in Nigeria. This should be celebrated and not condemned.

How can the quest for a permanent solution to the scourge of malaria be described as white elephant project? We are all victims and witnesses of what malaria does to the people. What mischief! All these mushroom writers are paid agents of darkness.

On the Idumuje -Ugboko land issue, any negative link to Prince Ned Nwoko is both trite and malicious. The community has been troubled since the past few years by a false claimant to the throne, Prince Chukwunonso Nwoko, who along with his violent gang unleashed mayhem on the village. The siege on Idumuje Ugboko allegedly resulted in destruction of houses, brutalization of prominent indigenes opposed to him as well as the death of a motorcycle cycle rider known as Cyprian   Kuomulo. Most of the perpetrators are facing prosecution. All relevant authorities have exonerated prince Ned Nwoko from wrong-doing over the land issue.

On March 16, 2015, Ned Nwoko as a member of the royal family, applied to the then Obi of Idumuje Ugboko Albert Nwoko 111, through his firm Linas international limited for allocation of 90 hectares from the land meant for community development projects. He further requested for extra  parcel of land to build the permanent site of a university as well as an international Golf course.

In response to the application, through a letter addressed to  Prince Ned Nwoko dated April 10, 2015, the king conveyed his approval of the application, after rigorous consultations with the palace chiefs, town union and general assembly of Idumuje Ugbo kingdom.

On July 20, 2016, Aniocha North local government issued the customary Rights of occupancy for the land through a letter to Ned Nwoko, signed by the chairman of the council Mr. Chucks Oseme. All necessary procedures pertaining to the acquisition of the land had been rigidly followed, contrary to the accusations of Prince Chukwunonso.

Also in its report dated November 23, 2020, the Inspector-General of Police Monitoring Unit said its investigation into the Idumuje Ugboko crisis showed that the allegations of land grabbing and harassment of indigenes  against Ned Nwoko were false and that the disputed parcels of land were legitimately acquired by the businessman. The Delta State Command of the State Security Service also investigated the matter and came to the same conclusion.

The Delta State government has also conducted an inquiry into the matter. The government team led by Chief Edwin Uzor, special adviser to the governor on peace building and conflict resolution met with all parties to the Idumuje Ugboko land dispute and came up with report dated February 18, 2021 that the community approval of the land was obtained diligently by Prince Ned Nwoko.

Today the STARS university, proposed as first sports university in sub Saharan Africa is being developed with giant structures springing up at its Idumuje Ugboko location, contrary to false claims of abandonment. Contractors are in fact putting finishing touches on the world class project. The multi-billion naira project is also intended catalyze development of the host community and its environs which had wallowed under underdevelopment and neglect for centuries. The university project is fully on steam and currently at 70 percent completion stage. Sahara Reporters are invited to Idumuje-Ugboko for direct on-the-spot inspection of progress of work at the university project.

Credible media reports have highlighted the authenticity of the land acquisition by Prince Ned Nwoko armed with incontrovertible evidence. A case in point is an independent report by one of Nigeria’s leading online newspaper Premium Times. The facts are the public domain for scrutiny and enlightenment.

Moreover, an Obi HRM Solomon Eziokwubundu Nwabuokei has been duly recognized by Aniocha North traditional rulers committee and Aniocha North local government as the legitimate king of Idumuje Ugboko.The kingship matter is before courts of competent jurisdiction and need no further discussion for risk of contempt.

Coming to the $418 Million Paris Club judgement debts, the narrative of Sahara Reporters is ill informed. Prince Ned Nwoko’s entitlement is legitimate and irreversible. Prince Nwoko, as a frontline consultant, provided legal services for years to the Nigeria Governors Forum NGF as well as well local governments to help them recover funds over-deducted by the federal government from their monthly allocations on the Paris Club loan and make the London Club loan exit payments. The states and local governments never had confidence in the chances of success of the consultancies. They never staked their money to fund the inherent costs and hence agreed to the percentages now being enforced. By the terms of engagement, Ned Nwoko spent his hard-earned personal funds to execute the assignment on the clear condition that where no money was recovered, there was no liability to the local and state governments. He bore the entire risk and loss while he engaged other professionals and in some cases borrowed through private arrangements to achieve the objective.

Virtually all the 36 states of the federation had at times received the Paris Club refunds paid in tranches, coming as a lifeline to end Nigeria’s recession. States and local governments received $13b from the efforts of Prince Ned Nwoko. States which were groaning under financial quagmire had a breather offsetting backlog of salaries of civil servants and fixing social infrastructure, in deference to their electoral mandates, thanks to the Paris Club refunds made possible by the struggles of Nwoko and fellow consultants.

Well meaning Nigerians have hailed the laudable policy of the federal government to liquidate the judgment debts, as boldly demonstrated by the fair disposition and approval of President Buhari for payment and issuance of promissory notes to the consultants. The series of correspondences and engagements with the office of the Attorney General and Minister of Justice, Abubakar Malami (SAN), as well as the Minister of Finance, Zainab Shamsuna Ahmed, have since validated the judgement debts, making all opposition against the payment feeble and unrealistic.

Prince Ned Nwoko as a large hearted philanthropist and sincere patriot represents light, hope and inspiration to both young and old in Nigeria and the world in general. No level of cheap propaganda by mischief makers can distract him in his commitment to service and integrity, through the Malaria Eradication Project, development of the premier sports university and victory over the Paris club loans refunds.