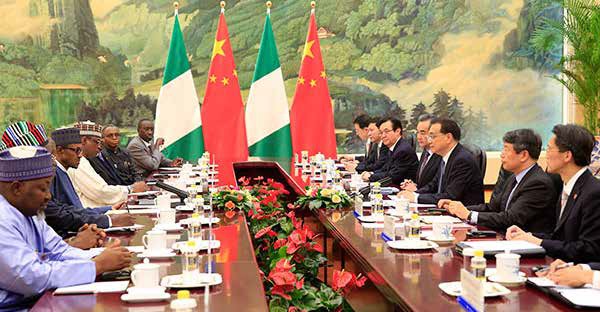 The diplomatic relations between Nigeria and China dates back to 1971. But the civilian government of former President Olusegun Obasanjo revived and strengthened it. Since then the growing influence of China in Africa and by extension Nigeria has grown in leap and bounds.
How then can Nigeria and Africa benefit from it; find out in this article by Paschal Emeka.

Many have considered the historical and unprecedented growth in the relationship between Africa and China as one of the greatest stories of the twenty-first century. Apart from the tremendous transformations taking place in the global political economy the relations has attracted excitement, anxiety, and confusion. To its promoters, it signifies the enduring cooperation between Africa and China, bred by the historical struggles against Western imperialism.
To cautious observers, it is akin to Asian colonization of Nigeria after European colonization a century earlier, in which Africa serves as a cheap source of raw materials, a lucrative export market for Great Britain manufactured products, and an opening for its surplus capital.
Rather than a development partner, some see China as Africa’s biggest enemy of development, whose quest for growth and avid mission for global markets threatens Africa’s industrialization, competitiveness and self-sustenance.
As a result of the growing influence of China in Africa, bilateral relations between the Federal Republic of Nigeria and the People’s Republic of China have expanded on growing bilateral trade and strategic cooperation. China is considered one of Nigeria’s closest allies and partners. China is also one of Nigeria’s important trading and export partners.
However, this development did not come without alarms. One of the alarms was raised by a former Central Bank of Nigeria Governor Sanusi Lamido Sanusi in an article published in the Financial Times. He described the relationship as a form of imperialism, whereby China buys crude oil and Nigeria imports a wide range of goods and commodities, ranging from textile and fabrics to electronics and building materials and advised that “it is time for Africans to wake up to the realities of their romance with China”.
Many expressed shock at the article by the former Nigeria’s apex bank governor. He had suggested that China should be seen as a competitor rather than a savior or partner that would lead Africa into a new dawn.
For him, China is getting credits it did not really deserve. Experts however argued that Chinese investments can make a positive contribution to Nigeria’s economy by providing employment, technology, management resources, and capital that would otherwise not be available and enhance economic growth. Nigerians have benefited from both the direct and indirect employment from Chinese subsidiaries located in Nigeria.
There are also benefits associated with the inflow of capital from China to Nigeria. As for technology and management resources, they have stimulated economic development and industrialization, and improved efficiency. One would expect that this technological and managerial knowledge should passed down to Nigerians by virtue of working with Chinese technology and expatriates, this unfortunately has not been the case.
Findings shows that most of the key technical and managerial positions are held by Chinese expatriates and the competencies associated with these roles are hardly transferred to Nigerian employees. Nigeria is still having difficulty upgrading and constructing new infrastructure despite exposure to Chinese technology and experiences working with them.
The technological expertise and managerial know-how remain with the Chinese, even after they leave Nigeria. In addition, larger chunk of profits make by Chinese in Nigeria found its way back to China, though some of it may be invested back into those companies in hopes of producing even greater profits. Very little of these profits are used to help Nigerians.
There is no doubt that the presence of Chinese companies in Nigeria increases the number of players in the local market and by extension consumer choice. This has also increase competition, thereby driving down prices. Imports from China bring in a variety of products previously unavailable because local manufacturing companies were unable to provide them.
However, imports from China often promote dumping of cheap products in Nigerian markets, which drive local companies out of business and allow the Chinese to monopolize the market. Consumers are often quick to embrace imported goods rather than purchase locally made ones, which further contributing to the downfall of local industries.
From the foregoing, it appears that every benefit from Nigeria-China trade seems to be associated with some cost which cannot be solely blamed on China.
Experts has blamed Nigeria’s inability to fully take advantage of the benefits of its trade relationship with China which lies in the initial trade agreement between Nigeria and China, as well as the fact that Nigeria’s resources have yet to be used to adequately develop the country. 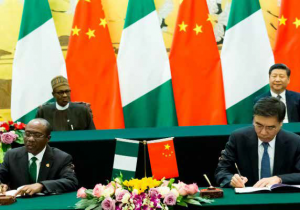 Bilateral agreements should be set up in a manner that favors both countries. However, the onus rests on each country to take advantage of the agreement to ensure its prosperity.
Many have accused successive governments including the present one of folding hands while China use predatory pricing methods to dump their goods in Nigeria at the detriment of its local industries. An economic expert in Lagos who craved anonymity said that Nigeria failed to demand that China transfer more technical expertise. “How many Nigerian firms are based in China? Not many. Did China restrict Nigeria from establishing firms in their country? The source of these issues can be traced back to the trade agreement”, he argued.
He suggested that Nigeria should build infrastructure, develop its local industries and increase production levels for goods that give it a competitive advantage over China.
According to him, despite its huge population, productivity is low because many people remain uneducated. It will take a very long time if Nigeria continues to wait for other counties to provide these essential factors that boost development.
In the final analysis, Nigeria’s trading relationships with other countries are beneficial. No country is an island especially where there are gains and benefit from multilateral relations.
The nature of existence which allows one country to be greater than another should provide an incentive for any country to try to outsmart an-other. In this light, China should not be blamed for trying to take advantage; rather, Nigeria should consider it as a competitor – as was rightly said by Sanusi Lamido Sanusi. Therefore, Nigeria must develop itself if it is to stand a chance at thwarting China’s pseudo-imperialism, because it is only through development that further growth and prosperity can be attained