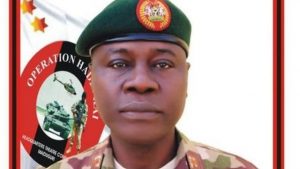 The Nigerian Army under the leadership of Major General Faruk Yahaya has redeployed some of its senior officers in a major shakeup.

Outgoing Army spokesperson, Mohammed Yerima, a brigadier general, made this known in a statement on Thursday.

Notable amongst the new appointments was that of C.G. Musa, a major general, who was named the new Theatre Commander of Operation Hadin Kai, the counter insurgency operation in the North-east region.

Also, Onyema Nwachukwu, a brigadier general, has now been appointed as the army spokesperson.

Another brigadier general, A.M. Umar, was named the chief of staff to the COAS.

The reshuffle, considered normal when there is a new leadership in the force, was expected when the Chief of Army Staff (COAS), Faruk Yahaya, a major general, was appointed on May 27.

He replaced the late COAS, Ibrahim Attahiru, who died in a plane crash on May 21.

A similar reshuffle in the army had taken place in February, a few days after Mr Attahiru took over.

In the latest reshuffle, Mr Yahaya urged all the affected senior officers “to justify the confidence reposed on them”, adding that all posting and appointments are with immediate effect.

Below is the full text of the press statement:

The Nigerian Army (NA) has released posting and appointments of senior officers. This is in line with the Chief of Army Staff vision to have a professional Nigerian Army ready to accomplish assigned missions within a Joint Environment in Defence of Nigeria.

The Chief of Army Staff, Major General Faruk Yahaya urged all the affected senior officers to justify the confidence reposed on them. All posting and appointments are with immediate effect.