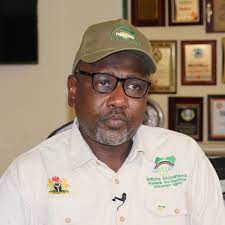 A cross section of Nigerians is calling for the scrapping of the National Environmental Standards and Regulations Enforcement Agency (NESREA), for lack of performance and loss of direction.
Those Nigerians who made their views known at the National Assembly premises are particularly irked by the nonchalance of the Director-General Professor Aliyu Jauro a former University of Bauchi lecturer.
They lampooned the DG for being indolent, refusing to carry out the mandate of the once bubbling agency, and instead spending funds on frivolous ventures.
One of the aggrieved persons who gave his name as Abubakar Ilyasu, refused to believe that NESREA was the same agency that helped prevent the nations border and sea ports from being used as dumping grounds for hazardous products.
“We were looking forward to more of that action, but now disappointed”, he told our reporters. Obviously worried Ilyasu couldn’t believe that a well-funded agency like NESREA could go to sleep when filths are taking over Nigeria.
“Look at Abuja that used to be clean; we were used to seeing NESREA officials on Thursdays doing sanitation; now we don’t know what has happened “, he disclosed.
Investigation shows that NESREA offices are quiet and taken over by indolence. A visit to the headquarters cut the picture of depression, much loitering and disoriented staff.
One of the staff interviewed who refused to reveal his identity stated categorically that under the present leadership, the NESREA is moribund.
“We don’t know why, but our ogas have abandoned the agency; we don’t go out for ordinary simple function as executing our mandate, no enforcement and yet they expect us to generate money”, said the staffer.
According to him, there are opportunities for greater things if only the management would sit up explaining that for now, it is like everyman for himself. Another staff pointed out that they read in the news that the agency misappropriated the sum of 1.25 billion and are surprised if the story is true.
“We like to work, but in a situation where all we hear is no money no money, what can we do?”, he said frowning.
On the other hand, a colleague at the lobby of National Assembly who is familiar with the operations of the agency attributed the poor state of events to the aloofness of the director-General, Professor Aliyu Jauro.
“We have encountered him several times and he seem to behave as though he is more of a University lecturer than an agency leader”, he explained that if that is the case he should leave the field for better environmental administrators.
“There are young promising environmentalists who can take over the mantle and create a better environment for Nigerians; NESREA staff deserve better leadership, certainly not under this professor”, he declared.
Upon further investigation, the general feeling out there is that the Federal Government should set in motion the procedure to scrap the agency or at best issue a statement blaming the Director-General for the current slide in fortune of the well-established agency.
NESREA was well known for traversing the entire nation but insiders reveal that the Director-General had his sights in the senate and wanted to contest the last election though he withdrew at the last minute.
Efforts to reach the Director-General on the phone for his own side of the story proved abortive; same as the director of administration and finance Alhaji Abubakar Samba. But an aide in his office said he has travelled out of town.