No federation is bigger than the ministry, Dare says 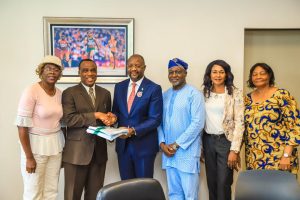 Minister receiving the report from the committee

The minster of youth and sports, Mr. Sunday Dare has said that no federation is bigger than the ministry as such he will not condole indiscipline from any one.

The minister stated this at the MKO Abilola stadium, Abuja while receiving the report of the ministerial committee on the performance of Nigeria’s athletes at the recent conclude World Athletic Championships in Doha, Qatar.

Mr. Dare thanked members of the committee for the level of commitment and patriotism they have exhibited at the cause of carrying out the assignment given to them within a short time.

He assured them that the ministry will go through the report and come out with action plan which will ensure the development of sports in Nigeria.

He also noted that this times things will be done differently for a better result. He said, “When we talk of about the next level this is what we mean, doing things the right way.”

Mr. Dare insisted that a team goes to championship with the best athletes and the best officials so that their work will not go waste.

Meanwhile, presenting the 10 copies report to the minister, the chairman of the committee, Proff. Ken Angueje said the committee had examined the facts, established the truths and suggested measures to prevent a re-occurrence of the less than impressive performance of  team Nigeria at the 17th IAAF World Championship in Doha.