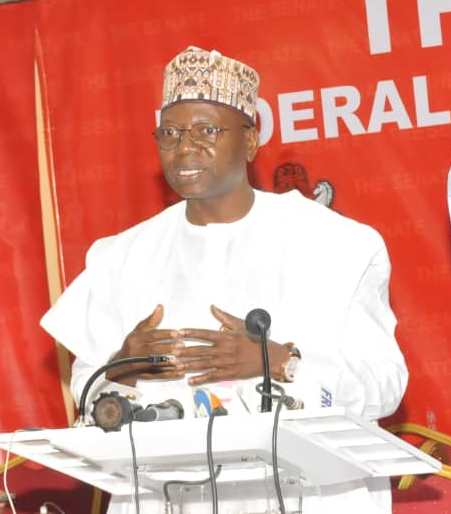 Senator Sani Musa, representing Niger East in the Senate on Thursday said that the proposed bill to establish a training academy for the Nigeria Security and Civil Defence Corps (NSCDC) if pass to law will wrestle insecurity in the country.

.The bill titled “Nigerian Civil Defence Academy Pandogari (Establishment) Bill, 2020,(SB.242) scaled through the second reading on the floor of the Senate on Thursday.

In his lead debate on a bill titled, “A Bill for an Act to establish the Nigerian Civil Defence Academy Pandogari”   said that the establishment of the academy had become “very necessary to meet the security challenges staring the country at a moment.

“Mr. President, it should be emphasized that the proposal for the establishment of the Nigerian Civil Defence Academy is a fallout of several internal security challenges we face as a nation which is clearly becoming overwhelming to our security agencies.

“It has become apparent that efforts have to be made to develop the capacities of supportive security organs such as the Nigerian Civil Defence Corps, who are expected to in conjunction with the Nigerian police provide internal security, and to attain the highest standards of professionalism. This is with a view to address other issues such as human rights abuses, abuse and misuse of power, unprofessional conducts and other related matters.

“This academy will provide strategic leadership training to the Civil Defence Corps which is most desirable in our national security matters and will also act as a think tank on domestic security frameworks and it will be an important platform in shaping up the community policing system.

Making further clarifications on the desirability of the bill, Sani said that the bill when passed and eventually signed into law will “provides joint training and instruction to both junior and senior service and civil officers and will be under the administrative control of the Ministry of Interior.”

The bill received commendations by all the lawmakers who spoke on the floor of the senate on the bill. The lawmakers noted in their contributions that the bill, its passage and the subsequent establishment of the academy will further enhance the strategies of solving Nigeria’s current and future internal security challenges.

The president of the Senate, Dr. Ahmad Lawan while making his remarks on the bill stated that the academy when established will enhance the capacity of security agencies is Nigeria.

Meanwhile, the bill was later referred to the Committee on Interior for further legislative action. The Committee was given four weeks to report back to the Senate.