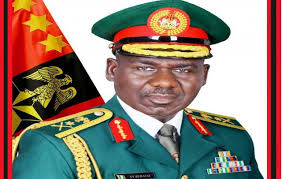 I find the publication in the Sun newspaper of 19/06/2019 over her caption “Buratai indicts soldiers fighting Boko Haram” as not representing what the CHIEF OF ARMY STAFF meant and an attempt to quote him out of context.

I wholly condemn the Sun Newspaper over its caption above implying that Chief of Army staff indicted Army Soldiers for being unserious and lazy.

It should be noted that the COAS spoke at the opening of a five-day transformational leadership workshop for mid level officers and soldiers at the Nigeria Army Resource Centre, Abuja.

I verily believe General T Y Buratai must have been quoted out of context in order to portray the Chief of Army Staff and Army as a whole as incompetent.At best what the Army Chief meant was theoretically what will make an Army not perform well. It was a mere theoretical gathering and has nothing to do with the current Nigerian Army Soldiers fighting BOKO HARAM which has been crushed save for new groups trying to grandstand as terrorists .I strongly believe that such unpatriotic publication casting the Army Chief in bad light is against National interest and aimed at weakening the morals of the Soldiers in the trenches.

I therefore urge Nigerians to discountenance the said publication as it is mischievous and uncharitable.