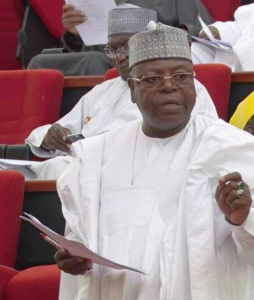 There is growing demand for the senator representing Sokoto East in the National Assembly, Sen Ibrahim Gobir to contest 2023 governorship election of Sokoto state. This is evident in the high number of well-meaning indigenes and organizations from Sokoto state taking turns to visit ask the third time senator to consider coming to govern the state as according to them, the senator possesses the requisite capacity and political will to build on the achievements of past administrations and develop the state.

Among those our correspondent sighted trooping in and out of the senator’s office in Abuja are Sokoto Indegens in Abuja led by Abubakar Aliyu Bargaja, delegation of Sokoto APC youth vanguard led by Suleiman Dole and  some former members of House of representatives, former Local government chairmen and a host of others.

Speaking to our correspondent after the visit, Mr Aliyu emphasised that their mission to the Senator’s office was nothing than to solicit that he contests for the governorship seat of Sokoto state come 2023 as according to him Senator Gobir is an epitome of quality leadership. “For the 10 years he has been in the Red Chamber, Sokoto East has never had it this good. Irrespective of the dwindling revenue profile that has affected the capacity of Federal Government to attend to certain responsibilities, Senator Gobir has proven to be a proficient legislator that has many project to his credit in his zone” he stated.

Similarly, Mr Dole of APC Youth Vanguard pointed out the sterling achievements recorded by Senator Gobir both in his constituency and at the national level and asserted that with such trump card to his credit as a legislator, the senator will perform wonders if elected an executive governor where he has access to more fund and legitimate powers to initiate and execute projects. He pleaded that Dist. Senator Gobir should heed to the clarion call and make himself available for election into the office of a governor assuring that he will win with a landslide.

“I can tell you that Sen. Gobir is a doctorate degree holder and one of the leading intellectuals in the senate. He was the Chairman Senate Committee on Senate Services in the 8th Assembly and is presently the Chairman of Senate committee on National Security and intelligence. He has sponsored many landmark bills and motions that are impactful to the lives of Nigerians. If given the chance to govern a strategic state like Sokoto, it is my humble belief that he will bring his wealth of experience to bear in repositioning the state for the present and future generations“ Mr Dole added.