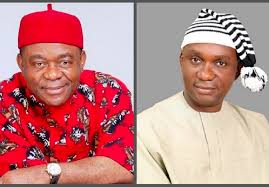 Sen T A Orji and His Son, Chinedum

A Civil Society Organization CSO, Genuine Anti-corruption Movement, GAM, has frowned on actions being taken by the Economic and Financial Crimes Commission, EFCC, against the former governor of Abia State now a senator, Chief TA Orji and his family cautioning what it described as professional and intending professional gubernatorial aspirants allegedly sponsoring the petitions to leave former first family of the Abia people alone to concentrate in its services to the people of Abia, saying they are distracting EFCC from running after authentic corruption cases in the country.

In a statement made available to newsmen in Abuja yesterday and signed by the National Coordinator of the group, Engr Mathew Abang, the body queried how a reasonable individual should investigate security vote of former Governor Theodore Orji. Is it because he is from the South East? Is there any present or former governor in the Northern, Western or Southern Nigeria that is not entitled to huge sum of money as security vote?

“We must be matured enough to understand that as a politician, you are bound to have enemies most of which come from toes you could have stepped on while administering the state. Consequently, when petitions are written, it should be read with unbiased mind-set to appreciate its merits. Most of those petitions flying around are just malicious documents that have no reasonable content, hence should be ignored than wasting the precious time of investigative” the statement added.

They called on the EFCC to show more restraint in responding to empty petitions as most of them can only send them on wild goose chase. “Besides, discrete investigation of crimes consumes a lot of money, EFCC should avoid primordial sentiments and act purely on facts and evidence not on mere propaganda” the further hinted.

Sen Theodore Orji as former governor of Abia state for 8 years was visible in infrastructural development and human capital empowerment which is why Aba remains the commercial nerve centre in the country till today. Similarly, he is a disciplinarian that never allowed his family to meddle with his administration. His Children that doing well in politics as exemplified in Chinedum Enyinnaya Orji the present Speaker of Abia state House of Assembly are chips of the old block.

It will be unfair to leave so many governors that have nothing to show in their 8 years reign in various regions of Nigeria and go after a prolific governor like Orji. The entire Abia state indigenes are united in support that TA Orji served the state with integrity and should not be persecuted for any reason, more so when no fund has been declared missing in Abia state Coffers.

On the judicious use of security vote by the former governor, the group drew the attention of the Anticorruption body to the fact that it is under the administration of T A Orji in Abia state that armed robbery and kidnapping was fought to a halt reminiscing that his government was able to mobilize adequate security network consisting of the Nigerian Army, the police, Department of States Security Services, DSS etc that killed the notorious kidnapping kingpin, Obioma Nwankwo alias osisikankwu and obliterated the criminal syndicate in Abia.

“Take a look around the country and see if any other state has recorded this level of success on security. The answer is no! Orji achieved this feat by expending the bulk of the security in providing adequate support to the security agencies at that time especially in area of purchasing operational vehicle, communication gadgets, paying inconvenience allowances etc. “T A Orji as a blessing to his people deserves commendation and not condemnation” the statement concluded