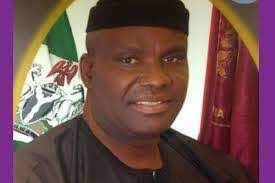 The attention of Distinguished Senator Ayo Akinyelure, who represents Ondo Central and also the Chairman, Senate Committee on Ethics, Privileges and Public Petitions, has been drawn to the above malicious publication, which is full of errors and hurriedly put together by a faceless online, Leading Reporters, with a view to tarnishing the good name and hard-earned reputation of the Distinguished Senator, which he had built over the years.

Inasmuch as the Distinguished Senator is not perturbed by the faceless and sponsored online publication, we deemed it fit to put the record straight as we will not allow his name and reputation to be dragged into the mud.

In order to hurriedly put the piece together, the faceless publisher(s), which we are challenging to come out of his/her hideout with facts, could not even identify his target as he refers to Akinyelure as “Akinyerule”, a clear indication that the write-up was a dead one on arrival.

Secondly, to put the record straight that, the Senator never owned 18 Bureau De Change Companies as erroneously alleged and most of the companies mentioned are no longer functioning and even when they were still functioning, no single contract was awarded to these moribund companies namely: PAL Construction Ltd, Kunly & Associates Ltd, Folly Tizzy Services Ltd and APL Insurance Brokers Ltd, while the Bureau De Change companies, the faceless online publishers) referred to were duly licensed by the Central Bank of Nigeria (CBN) and operations of the Bureau De Change Companies linked with families of Akinyelure has since late last year 2021 stopped with CBN pronouncement to stop forex bidding by all licensed Bureau De Change Operators in Nigeria. The business of Bureau De Change in Nigeria is therefore, highly regulated by the Central Bank of Nigeria.

We therefore use this medium to challenge the so-called faceless Leading Reporters to come out with facts and figures of this baseless publication within forty-eight (48) hours or be ready to face the full wrath of the Law, as we had already briefed our lawyers on this.

It is on record that Distinguished Senator Ayo Akinyelure, FCA have been spending his personal money to assist most of these Petitioners who either collect transport fares back to their various destinations or money for one assistance or the other after their Petitions might have been heard at public hearing, so, it is baseless to say that Distinguished Senator Ayo Akinyelure is using his office as Chairman, Senate Committee on Ethics, Privileges and Public Petitions to enrich himself.

It is also laughable, when, at the last paragraph of the faceless publication, the online Publisher(s) wrote that, “A// efforts to get to Senator Patrick Ayo Akinyelure to address the allegations against him as texts and calls texts to his known lines were not responded to as at the time of filling this report”.

It is on record that Distinguished Senator Ayo Akinyelure, who is a media-friendly Senator, is one of the few public officers that pick calls and responds to text messages at all times while his media aide response to all his media-related issues. So, for the online Publisher(s) to say the Distinguished Senator never responded to issues of this magnitude holds no water and it is baseless.

With this submission, we therefore reinstate that the faceless online Publisher(s) of the so-called Leading Reporters should come up with facts, figures and evidences they have against Distinguished Senator (Dr) Ayo Akinyelure, who was already a billionaire before coming to the Senate as a Chartered Accountant and Tax Practitioners Licensed to practice in the Federal Republic of Nigeria by the Institute of Chartered Accountants of Nigeria (ICAN) and the Chartered Institute of Taxation of Nigeria (CITN) with ICAN practicing Licence No. 1924 and CITN practicing No.007 respectively.

He is also the first Ondo State indigene to be licensed to run a private Polytechnic in Nigeria (known as Allover Central Polytechnic, Sango-Ota, Ogun State) since 2004 to date.

He is therefore a successful Chartered Accountant and Tax Practitioner of high reputation in all ramifications. Popularly referred to by his Colleagues “As the voice of the voiceless Nigerians” in both Senate of the 7th and 9th Assembly.

This mischievous so called Leading Reporters is hereby within 48 hours required to retract his baseless publication or be prepared to face the full wrath of the law and produce the petitioner who shared his fabricated experience with him, especially where he wrote that, “A petitioner who does not want his name mentioned shared his experience how Senator ‘Akinyerule’ leverage his petition to negotiate mouth­watering deal with a multinational company that shortchanged Nigeria Government of billions of Naira”.

Such a petitioner the online publisher(s) referred to above, should also be bold to come forward to substantiate his claim of “how Senator ‘Akinyerule’ leverages his position to negotiate mouth-watering deal with a multinational company that shortchanged Nigeria Government of billions of Naira”. The office of the Distinguished Senator will not allow any group or individual to smear the good name and reputation the Senator had built over the years to be dragged into muddy water of politics by the sponsor(s) of the said online publication.