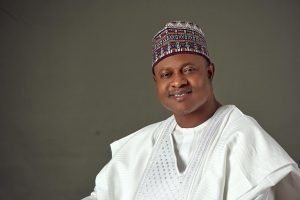 Senator Uba Sani, the mover of the motion

In a bid to curb the menace of modern slavery and child trafficking in Kaduna state and other parts of the country, the Senate on Monday urged the National Agency for the Prohibition of Trafficking in Persons, NAPTIP to establish state Task forces to combat the menace.

This was as consequence upon a motion, ‘Urgent Need to address the prevalence of Modern slavery in Nigeria’ by Senator Sani Uba and co-sponsored by thirteen other senators.

The Senate also directed the Federal Ministry of Health to, as matter of urgency provide relief materials and all other necessary support as may be necessary to the victims of modern slavery.

However, the Senate mandated the committee on Sustainable Development Goals, SDGs, the Federal Ministry of Humanitarian Affairs, Disaster Management and Social Development, the Federal Ministry of Health, the National Agency for the Prohibition of trafficking in persons, NAPTIP, the Nigeria Police Force and the Nigeria Immigration Service to set up a joint technical team that will promote inter agency cooperation, deepen synergy for effective intelligence sharing and see to the eradication of forced labour, modern slavery, human trafficking and an end to child labour by 2030.

They also urged them to intensify surveillance, embark on awareness campaign with special focus on land, sea and air borders as step towards curbing the prevalence of the modern slavery.

The motion drew the attention of the Senate to 300 persons including 77 children who were discovered by the police in Rigasa, Igabi local government area of Kaduna state on the 26th day of September, 2019.

“Apart from bearing scars inflicted on their bodies and injuries sustained from torture, some of the victims had been sexually abused while 3 people died while in custody” Uba added.