Football has promoted the friendship between people in China and Brazil. During the meeting with Brazilian President Jair Messias Bolsonaro on Oct. 25, Chinese President Xi Jinping said the two countries need to enhance people-to-people exchanges, especially in the areas of football and traditional Chinese medicine.

In July 2019, 14 teenagers from east China’s Zhejiang province went to Brazil for the first China-Brazil football cultural exchange camp. At the camp, these football players, aged from 12 to 17, were trained by professional coaches and played soccer games with their Brazilian counterparts. They also visited some football museums and iconic football players in Brazil.

“It is really nice to see them practice and make progress on the football field. They even talked with their Brazilian teammates in Portuguese,” said Marco Aurelio, a Brazilian football coach at the camp.

Aurelio established a close friendship with these teen football players from China that he didn’t even want to say goodbye to them after the one-month-long camp.

Brasil added that the BRICS countries could share their experience with each other and promote the development of sports among them.

According to him, China and Brazil have achieved some results in sports cooperation. He hopes that the sports cooperation will be strengthen under the BRICS mechanism and thus bring people from the bloc members closer to each other.

Sports exchanges and cooperation are mutual, said Brasil. He pointed out that while sharing the experience of football with other BRICS countries, Brazil also wants to learn from other BRICS countries about the sports items that they are good at, such as China’s table tennis and badminton. 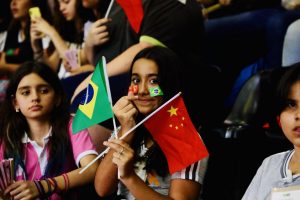 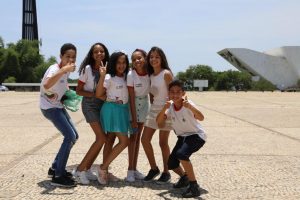 Local students smile at the camera at the Square of the Three Powers in Brasilia, capital of Brazil. (People’s Daily/Zhao Yipu)