Sultan of Sokoto Gives out Daughter in Wedding 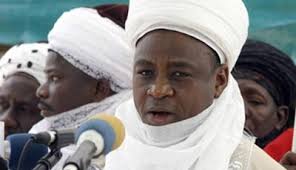 The Sultan of Sokoto, Sa’ad Abubakar III weekend gave out his daughter Fatima to the son of the former governor of Bauchi state, Isa Yugud, Mahmood in a grand wedding in Sokoto which attracted the high and mighty in the society.

The marriage was solemnised according to Islamic rites led by Chief Imam of Sultan Bello Mosque, Malami Akwara, while prayers were offered by Chief Justice of the Federation, Muhammad Tanko, and Chief Imam, National Mosque, Shehu Galadanchi, among others. A bride price of N50,000 was paid.

The Secretary to the Government of the Federation (SGF), Boss Mustapha and Chief of Staff to the President, Abba Kyari, were among dignitaries that attended the wedding ceremony and represented the president Muhammadu Buhari.

Among the prominent personalities that attended the wedding were popular business moguls, Aliko Dangote and Dahiru Mangal.

Among royal fathers that graced the occasion was Emir of Kano, Muhammadu Sanusi II, along with Emirs of Maradun, Argungu and many others.

Speaking to NAN at the end of wedding Fatiha, father of the groom and former Bauchi State Governor, Isa Yuguda, said, Bauchi and Sokoto, have a long-existing cordial relationship and the present marriage would surely rejuvenate it.

Mr Yuguda explained that Sultanate Council in the past appointed Emir of Bauchi as Chief Commander of the Caliphate.

He said distance should not be a barrier for youths and incoming generations to consummate marriages, stressing that their forefathers trekked barefooted from Sokoto to Bauchi.

He expressed optimism that the marriage between his son and daughter of the Sultan will be a blessing and prayed for Allah’s protection and guidance over them.