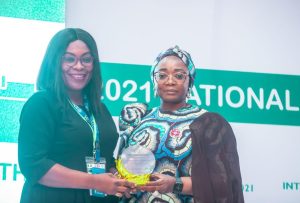 The Honorable Federal Commissioner of the National Commission for Refugees, Migrants and Internally Displaced Persons(NCFRMI) Haj. Imaan Sulaiman-Ibrahim has reiterated the strong impact genuine migration programmes and activities have on affected countries in the just-concluded two-day National Migration Dialogue(NMD) which ended successfully at the Internal Conference Center, Abuja
The National Commissioner made this known in her welcome address to the admiration of hundreds of participants who graced the occasion on day 2 of the National Migration Dialogue with the theme: “Human mobility in the context of sustainable national development”
Haj. Imaan told the listening audience comprising members of the Civil Society Organizations, Internal Partners, various government officials that well-coordinated migration policies fuel economic growth, produce innovation and entrepreneurship spirit in wherever country the people come from—and in those, they move to.
She said that ongoing global conversations have led to the emergence of various platforms that provide a veritable stage for strengthening discussions around migration governance. “This platform will continue to offer both policy and operational perspectives, exchange of information, sharing of ideas, best practices and experience as well as promote effective practice on migration”, she remarked.
Speaking further, Haj. Imaan noted that an enabling environment for the creation of a maximum and balanced effect, on the activities of government and international partners in Nigeria’s migration governance architecture was non-negotiable.
According to her, Migrants are a remarkable engine for growth and account for more than 281 million people around the world which translates to 3 per cent of the global population and contributes 10 per cent of global gross domestic product.
She explained that Nigeria’s commitment to sustainable migration governance was beyond question and those available statistics show that approximately $540 billion was remitted globally according to World Bank estimates of 2021.  She also gave an insight into the fact that while there are about 15 million Nigerians in the diaspora, they are known to account for $65.34 billion remitted back home.
Haj. Imaan said that the numerous growth and development witnessed in the economic sector could be traced to their resilience. “Migrants facilitate the flow of goods, factors of production and knowledge between origin and destination countries and establish fruitful networks which are beneficial to their communities of origin. “In 2 out of 4 of all engineering and technology companies established in the US between 1995 and 2005 there was at least one immigrant key founder”, she stated.
For enhancing the innovation capacity of host societies, Migrants, she also explained, are usually entrepreneurs who create jobs for migrants and natives alike. “If properly managed, Migration, particularly regular migration will remain a megatrend of the 21st century and will continue to generate streams of benefits to both sending and receiving countries as well as Migrants themselves.
This year’s 2021 National Migration Dialogue and the celebration of International Migrants Day was record-breaking in terms of participation and attendance.