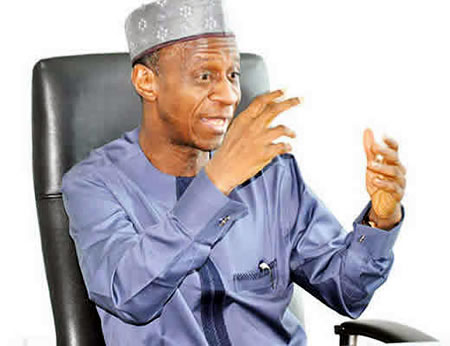 I supposed emphasis now is no longer on who should be where with scant regard to merit as influencing appointment decision factor, but who has the innately basic cognitive acuity to lead a national knowledge bank or intellectual community for efficiency. This in perspective, the return of Professor Elias Bogoro as Executive Secretary of the national TETFUND confirms his efficiency and moral trait for he leads by example.

Barely any government agency is as well managed or run as Tertiary Education Trust Funds, TETFUND under Bogoro, created by federal authority to manage funds being held in reserve for the provision of interventionist assistance for the growth and development of government owned tertiary institutions in Nigeria. Nor is there any institution of state with such robust and engaging mandate as that of TETFUND.

This is because the erudite Prof Bogoro came to office with a resolve: not to leave the agency the way he met it but to strive to effect most fundamentally profound changes that will leave lasting impacts on the various institutions of higher learning across the federation, such changes that never were prior to his assumption of office, resulting in poorly run universities and polytechnics alike. He has taken his time to review the existing work ethics as well as all the key departments of the agency to align them with the standard best practices as well as his proposed formulae for corporate efficiency and effectiveness.

The ethics emphasises a high moral standard. (This is necessary for an agency that holds and disburses huge funds to eligible institutions as TETFUD, nothing can far from that.) Today, therefore, there is scarcely any slipshod allocation of funds to universities across Nigeria suspected. He has high regard for integrity, efficiency and civility among its staff. This is so for Prof Bogoro is a disciplined and principled technocrat who relishes in uprightness. Today funds or grants for research purposes are disbursed to benefiting institutions as speedily as possible.

U.B Jubril, a Public Sector Consultant, once summed up his appreciation of Prof Bogoro’s work’s ethic thus: ‘’…Our experience began whilst in the Executive Secretary’s waiting room, we were reminded at sensible intervals by courteous staff…to be patient and that we would be seen.

…When we eventually entered to meet with the Executive Secretary, he had this sense of decency to stand at his desk and firstly apologised for keeping us waiting and then the humility to listen to and engage us in productive conversation.’’

As Jubril once noted, Prof Bogoro’s management style is transformational, transformational in the sense that since assumption of office, Prof Bogoro has carefully introduced various reform programmes to reposition the agency for efficiency and results. Under his leadership, not only has its service delivery improved above pre Bogoro level but also Nigerians have come to know for the first time that such an agency exists. Before now its activity was shrouded in complete silence and barely any Nigerian could conveniently tell you its exact mission. This is because its profile-raising component was less active and those managing it were similarly less effective, despite its utility within the context of functional tertiary education.

In fact, the return to office of Prof Bogoro is an attestation to his rare self-effacement, honesty and cerebral insight.  At least, we have seen the agency revitalized quite markedly to pursue its set goal and how its major elements have come alive. The bureaucratic bottleneck that used to characterize its operation has almost been eased off or given way to efficiency and robust service delivery. Applicants accessing its funds do so with less and less time consuming. In less than no time completed application forms are processed. Institutions do not have to wait for time interminable to have their application forms treated. Prof Bogoro has sensibly eased off the process, introducing transparency in its operation.

Several factors are responsible for it. One, Prof Bogoro is by nature a decent and ethically thoroughbred bookish aficionado with a faculty for contemporary management that stresses the importance of management by objective.  It shows where he is coming from and where he is going to. He is a sensibly clear-headed and imaginative intellectual. That he has been able to transform the agency in record time, giving it a look of dynamism for the first time, illustrates his efficiency. Secondly, he is a shrewd Chief Executive who recognizes what it takes to run an agency that is as complicated as TETFUND with false requests from most institutions. Prof Bogoro has the wisdom to treat applications at their merit. And thirdly, he is very honest and humble. The two are essential traits anyone running such an agency ought to have. Prof. Bogoro embodies both traits.

Obviously, nothing can be more heart-warming than the knowledge of the fact that Prof Bogoro is still in the helm to truly re-invent the agency. When the news first came that he was returned by President Mohammadu Buhari, I was among the first Nigerians that commended the president for returning him. If I were the president there would never have been a better alternative than Prof Bogoro of whose character has been tested and found to be suitable for the office.

He has a positive self-image. Moreover, he is quiet, unassuming personality. He is highly celebrated and most admired by Nigerians who have had the privilege of meeting him the first time for his cerebral perception and honesty. His ever seeming sense of civility and affability usually disarms his critics. With a track record of frank reputation, he remains the best in the fish pond.

Encountering him for the first time was a breath-taking experience given that he was too patient to attend to me. Most of those I have encountered across the various universities in Nigeria have one good thing or the other to say about him. For example, some of them believe that without him as the new Executive Secretary, the agency would probably have remained elusive or possibly an exclusive preserve of cream of the crop. But he made it accessible to all and functionally effective. Kudos!