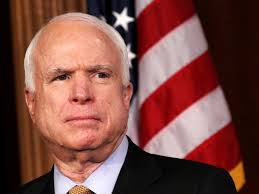 The United States of America, USA was over the weekend thrown into mourning mood as, John McCain, the US ranking senator and celebrated war veteran died at the age of 81. The distinguished senator is known for his works in restoring diplomatic relations with Vietnam, and for his belief in conclusive prosecution of the Iraq war. He chaired the Senate Commerce Committee and opposed pork barrel spending.

The Senator has been suffering from brain cancer and will be really missed by the American political and diplomatic community.
A statement from his office read: “Senator John Sidney McCain III died at 4:28pm on August 25, 2018. With the Senator when he passed were his wife, Cindy, and their family.
“At his death, he had served the United States of America faithfully for 60 years.”
US President Donald Trump, in his condolence message on Twitter said: “My deepest sympathies and respect go out to the family of Senator John McCain. Our hearts and prayers are with you!”
Former US President Barack Obama, in a statement, praised McCain for his dedication to service, stating that: “Few of us have been tested the way John once was, or required to show the kind of courage that he did. But all of us can aspire to the courage to put the greater good above our own.”
In a tribute published via her Twitter handle, Hilary Clinton said: “@SenJohnMcCain lived a life of service to his country, from his heroism in the Navy to 35 years in Congress. He was a tough politician, a trusted colleague, and there will simply never be another like him. My thoughts and prayers are with Cindy and his entire family.”