What next for Saif al-Islam Gaddafi? 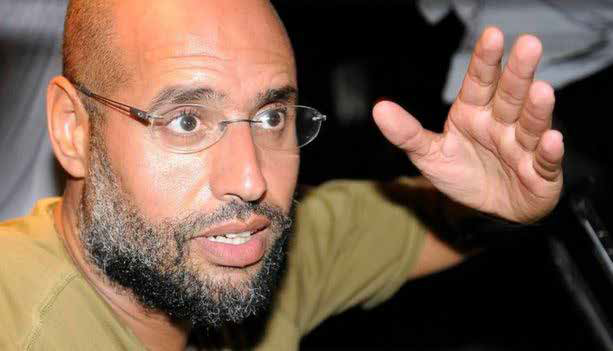 Saif al-Islam Gaddafi is reported to have been freed from jail in Libya after six years. So what next for the son of Col Muammar Gaddafi, who once appeared poised to succeed his father as leader of the North African country?

According to the militia brigade that captured and has detained him since 2011, as well as to one of his lawyers, he is indeed free. However, both parties made a similar claim in July last year. In the end, that appeared not to be true – at least not in the commonly understood sense of being free.
He may have been treated as a “free man”, in theory, over the past year by the brigade holding him. But there was no evidence then, nor any today, that he has ever left the outskirts of Zintan, where he has been held.
Libya and its militia politics is nothing if not complicated and is in a permanent state of flux. No-one can quite put their finger on why his release has been announced but some believe it could be linked to the wider, ongoing conflict between rival militia and political groups.
We do not know. His lawyer has so far not disclosed his client’s location for “security reasons”.
If he has left Zintan, the most commonly held belief is that he went to eastern Libya.
Others believe he went south, and some think he’s more likely to head to the town of Bani Walid than anywhere else. This was one of the last places to fall during the 2011 conflict in which his father was ousted and it is still seen by many Libyans as a hub for loyalists of the old regime.
Others have suggested he could be in Egypt.
This will only become clear if and when he makes a statement. His lawyer has claimed that Gaddafi could play a pivotal role in national reconciliation efforts.
In Libya today, everything is possible.
Since 2011, members and institutions of the old order have returned to power, albeit in different capacities.
However, if Gaddafi were to attempt this, he would be contending with multiple centres of power.
Some of the most powerful brigades in the country will be angered by his reported release and are likely to try to re-capture him.
The court in Tripoli that convicted him has not scrapped it and there does not appear to be any plan to do so.
The country’s prosecutor general, who sits in Tripoli, also does not
believe the amnesty law, passed by the parliament based in the east of Libya, applies to Gaddafi.
The militia that released him invoked this law when announcing his release – it claimed to be following legal procedures.

To some, he will always be the son of a former dictator who stood staunchly by his father’s side until his demise, and who allegedly played a role in ordering the killing of protesters.
To others, who once saw him as a reformist within his father’s regime, albeit with a healthy dose of scepticism, he could be a man with just enough “hard and soft power” to put an end to the chaos in the country.
There is a long list of militias, politicians, influential businessmen and ordinary Libyans who will always oppose him.
But some Libyans who have suffered since his father was ousted in 2011 may support him.
Saif al-Islam Gaddafi would also be supported by armed blocs who believe they could be stronger against their rivals with him by their side. At present, it is believed this could include some political and military forces in the east of the country, led by the controversial
military strongman, Khalifa Hefter.
Given that many of the Islamist political prisoners that he helped get released from his father’s jails played a significant role in the rebellion against his family, it is likely he will oppose them first.
But if we are to go by what his lawyers – past and present – have said, he seems to think the country is deeply divided and he could play a role in resolving that.
However, he is still wanted by the International Criminal Court in The Hague, which is seeking to prosecute him over alleged war crimes committed during the 2011 conflict.
In theory, if he travelled to any country that is a signatory to the ICC, it would be obliged to arrest and deliver him to The Hague.
Much of the rest of the world is seen as having played a direct role in overthrowing his father, so a few seats might shift uncomfortably in
Washington, London and Brussels.
However, there is a strongly held belief among Libyans that Western powers in particular would be prepared to work with anyone who could assert control and stabilise the country, as long as there was a shared vision and policies that were acceptable to them.
International powers do not want to be seen as meddlers in Libya’s internal affairs and the reality is that who they deal with is often dictated by who has the military might on the ground.
It is unlikely international powers would intervene militarily to prevent or reverse any return to power by Gaddafi.
To some Libyans, he does. The post-2011 chaos that has engulfed Libya leaves room for anyone to step into the vacuum – or at least try to.
Many would argue “everyone else has, so why not?”
He remains credible in the eyes of thousands of families who fled the country in the past six years, and to those who remained in Libya and were marginalised or arbitrarily persecuted by lawless militias.
But there is a fine line between reality and fiction in Libya today. They often seem to overlap, much to everyone’s confusion. The reality in this case is that any attempt by Gaddafi to return to power would not go uncontested and would be unlikely to happen soon. The Gaddafi legacy is still strongly associated with tyranny and is a time that many Libyans do not necessarily want to go back to – but many also now feel it is the “lesser evil”.
Civilians are yearning for stability and a time when their lives are no longer defined by the conflict that is tearing the country and its social fabric apart.